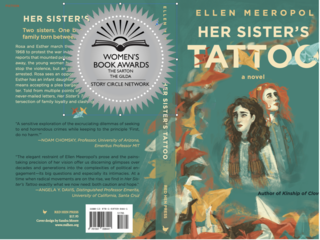 I'm happy to announce that my fourth novel, Her Sister's Tattoo, has been selected as a finalist in historical fiction for the Sarton Prize. I'm especially pleased because May Sarton is a favorite and much admired author. More information about the prize and its background is available here.

Also very pleased that my review of Celia Jeffries' gorgeous debut novel is up on Mom Egg Review, here.

It took a long time for this piece to be published, but "Success and the Late Blooming Author" is out in The Writer's Chronicle, February 2021 issue, with Celeste Gainey, Sandra Gail Lambert, and Cynthia Robinson Young, here.

My fifth novel, The Lost Women of Azalea Court, will be published in fall 2022, by my beloved Red Hen Press.

Much of my energy this year is going into revising my first play. GRIDLOCK is a quasi-sequel to Her Sister's Tattoo, and I'm having a great time learning how to write a script for the theater. 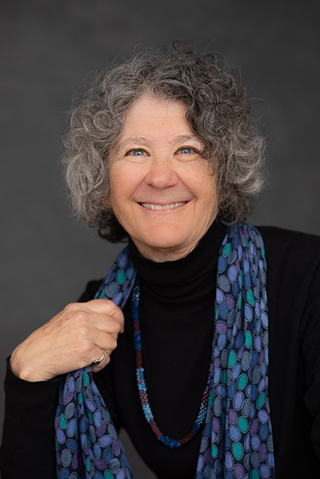 A literary late bloomer, Ellen Meeropol began seriously writing fiction in her fifties, but her first publications came much earlier. At age twelve, her essay, "I am a Square Dance Orphan," was published in a national square dance magazine and she wrote a monthly feature column for her high school newspaper in the Washington, D.C. area. Ellen studied art at Earlham College and the University of Michigan.

After working as a day care teacher and a women's reproductive health counselor, Ellen became a registered nurse and then a nurse practitioner, working at a children's hospital in western Massachusetts for 24 years. During that time, she authored and co-authored two dozen articles and book chapters about pediatric issues and latex allergy. She was honored for excellence in nursing journalism by the nursing honor society Sigma Theta Tau and received the Ruth A. Smith Writing Award for excellence in writing in the profession of nursing. In 2005 Ellen was given the Chair's Excellence Award from the Spina Bifida Association of America for her advocacy around latex allergy and spina bifida.

In 2000, after decades of reading voraciously and thinking that "someday" she would write, Ellen started writing fiction and studying craft, earning an MFA from the Stonecoast Program at the University of Southern Maine. In 2005, determined to spend more time with the characters demanding her full attention, she left her nurse practitioner career.

Ellen is a frequent presenter at conferences and book festivals, including the AWP annual conference, The Muse and the Marketplace, Wordstock, Virginia, Salem, and Maine Festivals of the Book, the San Miguel International Writing Conference, and the WriteAngles Writers Conference. She has taught fiction workshops at Writers in Progress in Florence, MA, Grub Street in Boston, and World Fellowship Center in New Hampshire. She volunteers with WriteAngles, Inc. and is a Founding Member of the Straw Dog Writers Guild, coordinating its social justice committee.

She is married to Robert Meeropol, the younger son of Ethel and Julius Rosenberg. They have two grown daughters, two grandchildren, and one cat, and live in western Massachusetts. Ellen is a founding board member of the Rosenberg Fund for Children, which was started by Robert in 1990 in honor of his parents' refusal to "name names." Ellen's dramatic script telling the story of the foundation has been produced five times, most recently in Manhattan in June 2013, featuring Eve Ensler, Angela Davis, and Cotter Smith.